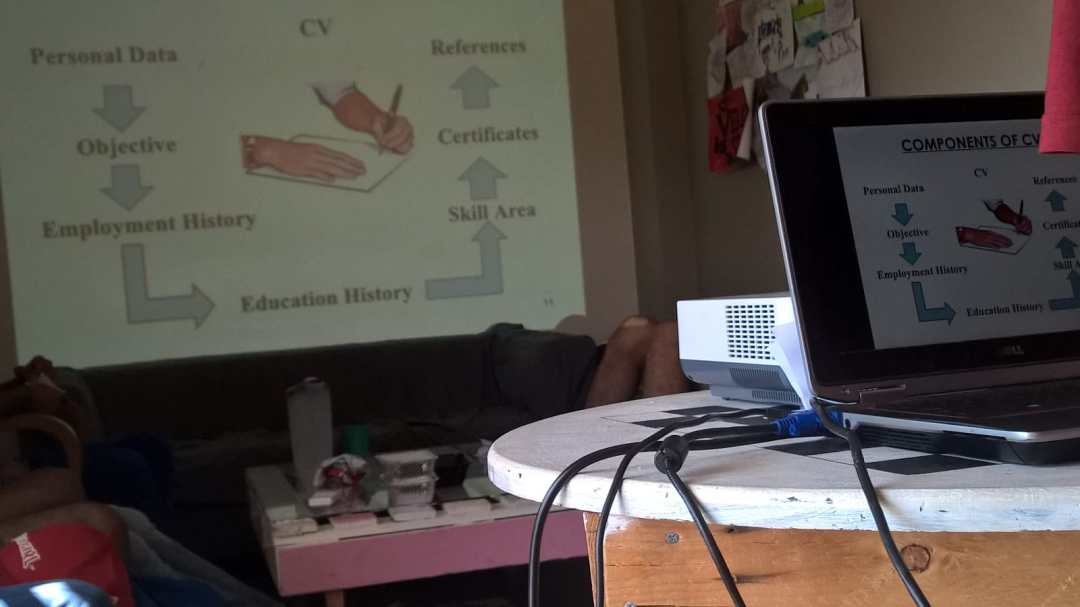 That morning K., an 18 year old asylum seeker from Afghanistan was rude to M., a 21 year old Syrian refugee who volunteers for Velos.  M. was surprised because this was by no means typical of K. and sat with him. He soon sensed that M. was very stressed because he had just turned 18 and was afraid that many of the provisions he enjoyed as a minor would be soon taken away from him for becoming an adult.  Instead of anything else, M. suggested to K. that they should prepare a CV for him, since they had already discussed that a job would be what he would need soon. K. agreed but he was afraid that he had nothing really to write on the page in terms of skills, degrees acquired etc.  M. insisted that they still should do it, and maybe write more about what he would like to accomplish in the future, what he aspires to be, what he really likes and is of interest for him, instead of what he has already done and completed. He somehow insisted that they create together a CV more about the future than the past or the present.   A very nice looking one, for sure, like an infographic, and with a nice photo. And that is what they did.

K. was really happy about the result.

Was this a fake CV?

In what sense is the present of a disenfranchised young person more real than his/her future?

Are barriers, unequal opportunities, being spoken-down to, ignored, more real than a future, better positioned, self?

Skills sharing and learning from each other at Velos is very much geared towards aspiration and anticipation.  It is the planting of some seeds, about what one can do to improve his/her skills, and navigate an adverse social environment; but it also always touches upon what one wants to become and be in the future, not just the immediacy of situations.   Or rather, the immediacy of situations and experience is linked in the heads of young people with much future-oriented thinking, much more than one – not so young anymore, or in a different situation – would assume.

Again: is this misguided? Does this approach amounts to the harnessing of unrealistic expectations?  Is it advisable that a young asylum seeker gets to know something elementary about, for instance, digital careers from a peer, even if the possibility and the barriers and effort involved of accessing such an employment area are disheartening?

This is a question that seems out of place in a contexts like Velos Youth.

Young people here primarily get to know that accessing resources is about not giving up, but, also, that this can be quite hard.  The not-giving up part does not come from encouraging false hopes or wild dreams, but from expanding one’s field of social perception. The empowering message of skills sharing workshops goes like this: yes, there are so many things involved in actually pursuing an educational, vocational, professional pathway, so many details to attend to, so much effort and so many barriers to overcome.  But these pathways do exist and many more, actually, and it can all start from small things and individual aspiration.

Through such processes and incidents in Velso Youth, like skills sharing, what young people really at the margins learn is to be young people; probably not much more than that in terms of assets or skills, but also nothing less.